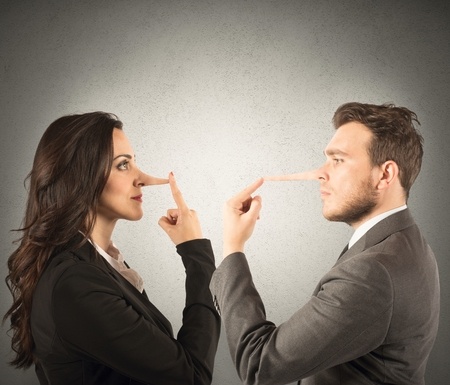 This is a huge subject and one I think that you might want to consider diving in to.

We are all fvcking liars.

Mostly we lie to ourselves and to our women. “no you don’t look fat in those jeans” and “No I’m not attracted to your best friend” because we don’t want to deal with the negative uncomfortable feelings that come up when a woman is upset and unpredictable.

It rattles us and causes us to “tell her what she wants to hear”.

I’m here to tell you that is just about the most selfish, cruel and ultimately self destructive thing you can do. It’s also extremely “low status” and one of the secret reasons why women “lose attraction” for their man.

We ought to man up and start telling the truth…

Like instead of “OK let’s be monogamous”, how about, “Hey I really like you and I’m attracted to you and it feels like we are heading somewhere really cool together, and because I deeply respect you I have to be honest, [notice there was no “but”] and tell you that I don’t really feel like I can make that kind of a commitment yet. Not sure I could ever make that.”

You know? Imagine being man enough to actually say whatever is true for you… right then and there.

This last scenario would have saved me 4 years of relationship angst and personal pain, not to mention untended trauma inflicted on my last girlfriend… who wanted “the One”. Who wanted Monogamy and Exclusivity.

We were getting hot and heavy and moved into her bedroom. Naked. Passion flowing and Juices dripping…. and THAT’S when she said, “If we do this it HAS to be monogamous.”

I SHOULD have said, “well, I really like you and I’m really hot to have great sex with you, and I don’t feel like I can honestly make that kind of promise to you until AFTER we’ve had sex for a while.”

I should have been willing to WALK THE FVCK AWAY. But I didn’t have the balls because I wanted her right then. And so I lied. I said, Ok. Let’s be monogamous. I actually almost believed it when I said it…

BOOM! how many fvcking seconds did that take?

And I was caught by my pubes… AGAIN.

You see, I was raised by a powerful, dominant mother who preached, “If you can’t say anything nice don’t say anything at all.” And a father who said, “Always keep your promises.”

And we all live in the  culture of the “white lie” where we tell each other harmless little fibs so everybody feels better about themselves and their fat asses and small dicks.

I have a good friend who is cheating on his wife.

I don’t blame him.

I think she’s a narcissistic professional “victim”. But she just went through a “really tough time” so he doesn’t want to tell her their marriage is over because it would get her upset. Then there were the holidays… he didn’t want to upset her then… then there was a lot going on at work…. then her birthday was coming up and that wouldn’t be right…

He didn’t want to tell her then because it would be too cruel… and he finally admitted, stressful for him…

And that is the most honest reason he has given…. He doesn’t want to deal with her shit so it is much easier for him to just fvck some other woman while his wife is going through her “tough” time…

So he has just closed down…. “Don’t you love me anymore?” she whines. “sure dear…” Then he changes the subject. Somehow he thinks he’s fooling her.

We are now several generations of men who were raised by women, taught by women and now often work for women… Women who they have been trained to please and obey. It’s kind of nauseating to me now… the way I worried so fucking much about upsetting “her”. Mostly beause if I upset her she would take away the thing I really was hanging out with her to get, SEX.

Isn’t it ridiculous that so many of us make our fvcking deals with the fvcking “devil” in the lame hopes of getting sex. But ironically being pliable pleasers and “yes” men to our women, not only turns them off sexually but it pisses them off in ways that they are not even aware of.

Even the most “liberated ” woman unconsciously wants a man who is not afraid of her. She wants a man who isn’t threatened by her emotional storms. Who allows her to express herself without having to edit or censer herself in order to “Pwotect his wittle feeewings”.

So in other words his fear of her anger causes him to lie about his true feelings and desires so he hides his true self… and attempts to manipulate her into having sex… His truth may be that he just wants to fuck her and then do his own thing.

His truth may be that he isn’t really attracted to fat women. She USED to be slender. But now she’s 50 pounds heavier and is jamming food in her mouth so fast it’s obvious it ain’t gonna change very soon.

But if he tells her she IS fat and not just in those jeans, she will get upset and yell and throw things or make things very uncomfortable for him. AND she will damn well NOT be giving any blow jobs in the near future… No backrubs. Not making any dinner either… So instead of leading her with his powerful masculine energy, He abdicates his power to her and while she may at first enjoy having things her way, ultimately she will be miserable as well…

The bottom line is that she can’t trust him. And the reality is we tell ourselves we that the white lies are to protect the other person’s feelings. The truth is we are really lying to ourselves. We are lying to protect ourselves from having to deal with conflict or unpleasant interactions.

But if he was honest from the beginning. She would have been able to make her own decision about whether she wanted to fvck him anyway…. (news: they often want to fvck you anyway. It’s usually just a test so she can justify fvcking you without feeling like a slut or that she’s too easy.)

And yeah, women lie too.

To get first crack at my new course: “Stepping In To Your Power as a Man” opt in below this post.