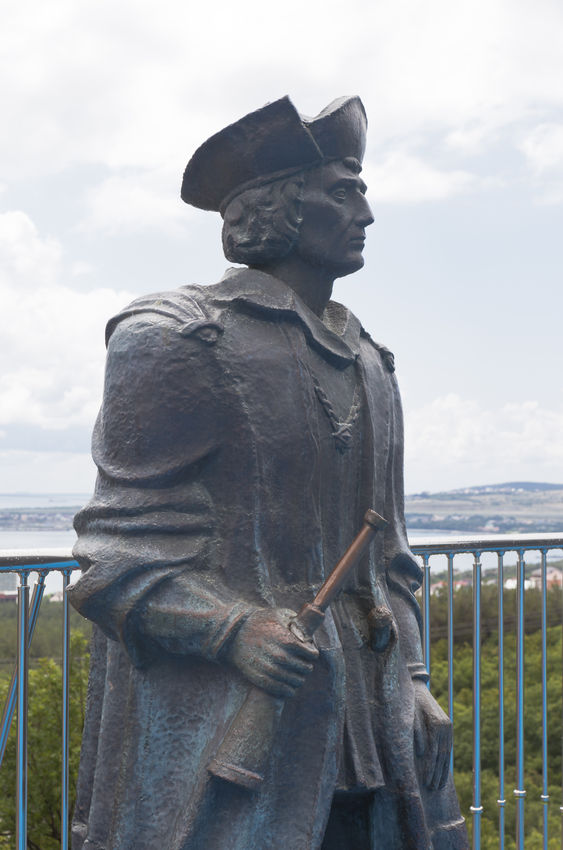 By many accounts, Christopher Columbus was a real jerk. Worse than that actually.

I am pretty happy to join with Native Americans in condemning him as a worse force for genocide than Hitler, Mussolini, Stalin, Genghis Khan, Attila the Hun or any of dozens of ancient and modern “bad guys”.

Millions of native Arawak and Caribe indians died as a result of his establishing his headquarters on the Island of Espaniola, now home to the Dominican Republic and Haiti.

But one thing you HAVE to give him credit for.

He BELIEVED in himself. He SOLD his idea to Queen Isabella. In an age when your place of birth usually condemned you to a life at the same social and economic level as your parents, Columbus totally “boot-strapped” himself and DECIDED he was the ADMIRAL of the New World.

He was a tough guy in a tough world and he was a survivor.

Today, because of his willingness to push the boundaries of conventional beliefs about the world, we live in a very different LOCATION.

Of course some other bad guy probably would have come along and done exactly the same thing. There was a tremendous imbalance of power and technology at play.

Soon after the Spanish basically wiped out the native americans in the Caribbean, they looked around for someone to do the hard labor of destroying the pristine environment, so they really cranked up the African slave trade…

So if you want, you can hate Columbus for that as well.

But instead of hating shitty people who did what we think of as shitty things in the past (that we now benefit from), what can we learn?

What can you and I discover of meaning and usefulness on this beautiful, pristine, October day that just happens to be Columbus Day?

First, Columbus was a product of his times. He would NEVER in a million years see himself as a bad guy. He was operating according to the beliefs and “pre-sets” of his culture. Like a fish doesn’t perceive the body of water it is immersed in, Columbus wasn’t CONSCIOUS of how his thoughts and actions were constantly being directed by the overriding cultural beliefs and ideas…

Secondly, you HAVE to give him credit for being a BOLD and ACTION TAKING person. He faced the fear of the unknown and pushed himself and his crew into new uncharted territory.

Thirdly, he was an ego driven, fortune seeker who attempted to negotiate 10% of ALL money made in the New World. Queen Isabella was a better bargainer and offered him POSITION and TITLE. Columbus SETTLED for the TITLE.

If he had gotten his 10%, He could have RULED the world. The world would be run by HIS descendants…

OH, wait… we have CORPORATIONS and GOVERNMENTS getting their 10% of EVERYTHING today… hmmmm.

And what do we know about Governments and Corporations? Well they are a lot better at hiding the fact that they are exactly and ruthless and power hungry as any old Columbus types.

They are just better at manipulating the media…

So before we condemn a single man for generations of genocide and horror, Let’s just take a moment and notice the many ways in which we Americans (and Europeans) benefit from the culture we fail to notice all around us…

And the biggest lesson of all…

Today. Believe in yourself. Take action. Push back the boundaries of what you think is impossible.

I’m not saying to cut Columbus any slack. Just to realize we are not better than him. We are all proceding through life according to our cultural and familial belief systems.

Change the BELIEF and you change REALITY.

Your assignment today is to play with that idea… at least a little… while you get outside and have some fun.