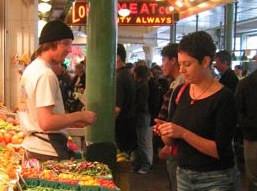 I’m a member of a natural foods co-op and part of my member hours is to help the customers bag their groceries.

I chose this job because it gives me lots of opportunities to interact and even flirt with lots of attractive, healthy women as they are checking out.

It’s a moment where they are paused and there are lots of non-threatening things to chat about like what they’re going to make with the veggies they’re buying or if the protein powder they’re getting is part of a training regimen for a marathon etc.

Please Note: I’m currently in a wonderful relationship, but as a former painfully shy guy it’s just a blast to see how far I’ve come and to keep practicing my people skills. The other key factor is that I don’t need anything from any of these women.

I am just there to have fun and be helpful and even entertaining, so it takes the pressure off.

And that’s a key attitude to have as you begin to change the internal program called “Being Shy Around Women.” It also helps me to stay in a place of positive empowerment with my girlfriend because I’m not with her out of desperation. Perhaps a separate post about that some day…

Anyway, last week one of the cashiers at the Co-op, a young 20 something guy (who so totally is like YOU even if you’re 40) expressed his admiration for how relaxed and confident I was chatting up the ladies. He said, “I get all flustered and awkward and I don’t know what to say or do. I’d like a girlfriend but I have no idea how to get a girlfriend.”

So for him, and for the rest of you guys out there, some helpful tips. The most important tip is to practice the following tips with EVERYONE. Not just the attractive women. Do it with old ladies,  old guys, couples, moms, fat chicks, skinny chicks, little kids.  Keep in mind that you are the host of the party.  If someone doesn’t respond positively to you remind yourself that they’re just having a bad day.

It’s not about you.

So here are my tips to help you overcome shyness with women in any situation, like a check out line or waiting room.

5 tips to Overcome Shyness with Women

Yeah that’s it. Just do it.

This was one of the first things I did years ago and it worked like a charm. I would just say hi and continue on my way. It always made MY day so much more enjoyable and probably brought a little light into some other folk’s lives as well.

I simply pointed it out. “Hey you two match!” We all smiled and chuckled a bit about that.

He could have done that just as easily.

The world is too damn serious. People’s lives are full of serious stuff. Help them lighten up a bit.

One caution here is to not over do it and become a buffoon. For example, one attractive woman was purchasing some cut flowers. I said, “Oh THANK you SOOO much for getting those for me!” She laughed and said, “Sorry I’m getting them for ME!” We had a nice conversation about flowers and I made sure to mention my girlfriend so that she would realize that I was not “hitting” on her.

But if I wasn’t in a relationship I would have said, “too bad we can’t talk more, you seem like a cool person to get to know and I’m new in the area…” No supplication, but offering a challenge… (thank you Ross Jeffries)

Another example involves a woman who had a really short buzz cut and I asked her if I could feel the back of her head! Her boyfriend had a buzz cut too (hadn’t noticed him!) so I ended up being silly with both of them and comparing his buzz cut to hers.

His was sharp and bristly hers was soooo soft…. ;o)

4. Ask a question about a piece of jewelry or clothing she is wearing

Example: “Cool necklace! What’s the story behind that?”

There is almost always a story and it is usually positive because otherwise she wouldn’t be wearing it.  I’ve had  few women say. “Oh no story. I just saw it and liked it and bought it.” In which case you could offer some alternate story that would be fun and whimsical like: “oh that’s too bad…I had this whole image of you finding it in the middle of the desert after an incredible quest and adventure…”

5. Be the one having the most fun there

Your own internal world is the most important piece of this.

It took me a lot of practice to stop taking myself so seriously and to stop worrying about what other people were thinking about me. The main attitude you have to develop is playfulness and the willingness to learn about other people. If you are in a state of joy and curiosity they will follow your lead.

So there you have it. Five strategies to use the next time you are standing in line at the grocery store or working at your job as a bagger… It COULD be the best job you’ve ever had.

Tired of being clobbered by shyness around the women you’d most like to get to know?

Or if you want a bunch of awesome techniques to approach, pick up and seduce women after you’ve overcome shyness…