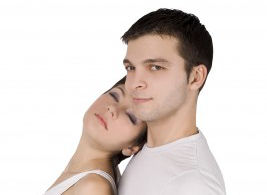 This is from the recent New York City Ross Jeffries Speed Seduction Seminar that I attended.

(In fact, I’m in this video! That’s the back of my head in the foreground of the shot!) You can’t quite see it in this video because of the back-lighting but this young woman definitely looked “spaced out,” “tranced out” or slightly drunk.

But sitting there in the room I could literally see the transformation happen.

More comments below the video…

The point I’m trying to make for you shy guys is two fold.

First of all, I was sitting in a room of 50 guys who basically all admitted to being either currently or formerly as painfully shy as you.

Second, Each of those guys was only different from you in that they actually had reached a point where they were no longer able to accept their lot in life and they took action!

In my opinion the best part of the seminar was not the demos. It was the belief change work Ross did with the group in order to eradicate the crappy thinking patterns that guys have either been trained into or have self hypnotized themselves into around women. There is so much garbage drilled into both men and women in our screwed up culture that by the time you reach adulthood, you need some serious personal work to clear it.

Not just you. All of us.

You can save a lot of time and money and pain by getting help.

Check out my new course…