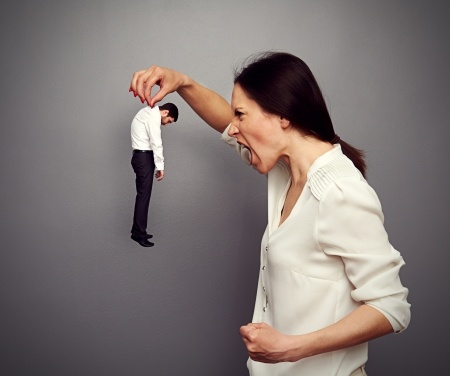 Why Men Are Better Than Women…

Take charge. No-nonsense, C-level executives, entrepreneurs, administrators, CEO’s in business, “take charge” kind of women in so many areas of their own life…

If she’s a CEO of a million dollar company, HE will need to be a CEO of a larger one… or have other deeply masculine traits that allow her to step out of the pants and into “something a little more comfortable…”

But those guys are RARE. [but not for long if I have anything to say and do about it…]

What you can also notice as you look around are a certain, “soft” “gentle” man who tags along after these powerful women…

Somehow he’s a man… I mean he sort of looks like a guy but he is compliant and defers to her in all things… In other words SHE’s “wearing the pants” — the other term that shows up is “Pussy Whipped”.  Ultimately he’s a man in form but not in spirit.

She’s got the masculine energy tightly gripped in her little manicured hands… The bizarre thing is that she wants to let it go but she can’t just fvcking hand it to the guy.

He’s got to TAKE it.

Hint: The Masculine does not ask permission.

Let’s take it to a different context: DANCING.

I talked to a woman at a relationship seminar a while back who shared a story about taking Tango lessons… “it took me a YEAR,” she explained, “to stop TRYING to LEAD…” whenever she forgot to follow or tried to take the lead (as she was used to, being a modern American woman), the Argentinian male dancers would literally just walk away from her in disgust, leaving her embarrassed and alone in the middle of the dance floor..

We both had our little “ahah moment” about that. The modern American woman is used to leading… The modern American male is used to being told what to do by the feminine. Many of us raised by single moms, internalize that we were supposed to be pleasing mommy, pleasing our mostly female teachers, told by the media our job is to please women, take them places, buy them things, give them what they want… treat her like royalty, give her all our money. Ask her permission before we make decisions… Ask permission before we kiss them… Constantly being told to remember “no means no”. And that our sexuality is threatening and unwelcome to women… so many of my guy clients use the phrase “walking on eggshells” around the women in their lives…

Ultimately, leadership is a dominant masculine quality. If she is holding the masculine, the laws of Polarity determine that her man will HAVE to take the feminine energy pole…

Ultimately this is the worst kind of Pole Dancing for BOTH men and women.

And repeatedly I hear women sigh and wistfully ask, “Where are all the men?”

What they are really asking is “where are the men who by sheer force of character and empowerment, LEAD?” She wants him to lead her back into her feminine where she can relax, feel safe, soften and open up.

Women all over the world are asking for men to stop following and start leading… but obviously they ain’t just going to let go of their power… they can’t MAKE a man lead. HE has to take that mission on his own initiative and lead without asking her permission. And she may not automatically follow his lead.

She will test each man to see if he is authentically leading from the masculine or just trying to manipulate her into another relationship where she has to wear the pants and make things happen… She will make a show of attempting to take over the lead, but really, she doesn’t want to win this battle… The truth is she can’t just hand it to him. She has to know on a deep level that he is strong enough to handle HER without becoming flustered or freaked out.

He needs to be the Lighthouse solidly grounded on the rock, so that she can be free to be the Ocean of emotion which washes over the lighthouse which stands unmoved by even the most intense emotional storms… Once that is established she can relax and feel safe….

I also talk to many women who are in long term marriages with their “best friends”… and they inadvertently mention (again wistfully) there is no sexual spark. Again when I look at these relationships from the outside, it is ALWAYS clear to me that the woman is trapped in the masculine energy… and the man by default is stuck in the feminine…

Because this is unconsciously PROGRAMMED by our current cultural framework and media bias, neither one of them has a clue as to what is going on… they just know something is missing… Most resign themselves to just putting up with it and going through the motions of being happy.

I think that’s a tragedy for both Men and Women.

The Poet Rilke over one hundred years ago forsaw our current predicament as well as the ultimate resolution:

The girl and the woman, in their new, their own unfolding, will but in passing be imitators of masculine ways, good and bad, and repeaters of masculine professions. After the uncertainty of such transitions it will become apparent that some were only going through the profusion and the vicissitude of those (often ridiculous) disguises in order to cleanse their own most characteristic nature of the distorting influences of the other sex…. Some day there will be girls and women whose name will no longer signify merely an opposite of the masculine, but something in itself, something that makes one think , not of any complement and limit, but only of life and existence: The feminine human being… Rainer Maria Rilke, “Letters To A Young Poet” page 59

While my headline “Why Men Are Better…” was intended to be controversial to get your attention, the point is NOT that the masculine is in any way “better” than the feminine. Both masculine and feminine are the yin and yang of the same elements of life… neither is better. Both are necessary.

It’s just that the MASCULINE must LEAD. A man must dominate his path. A man must put his vision and quest for accomplishment first, before his women. And deep down she wants it that way.

A man must feel comfortable taking risks, speaking his truth, stepping out into the world to achieve and conquer his weaknesses. A man must seek the company of other men in order to feel totally at ease with his own maleness.

The masculine is not ashamed of it’s self. The masculine will NOT be told to “behave”. It will Not be censored by politically correct “polite” language that reeks of “fitting in” or “compromise in favor of pleasing women.” On some levels the masculine does not “give a fvck”.  The mission is on. Either follow or get out of the way.

Ultimately despite whatever women say about equality, most women secretly despise the men in their lives who they can control or dominate.

Ultimately the masculine and feminine are destined to dance together in sweet, rocking delight, enjoying each other and the differences that polarize us sexually and allow us to fully experience the wonders of magnetic attraction…

So America, Europe, South American, Australia, Asia, Africa, welcome to the revolution… Not back to the stupid, rigid social ways of the past but forward in a new direction where men and women can come over and over again to the same conclusion: “Viva La Difference!”