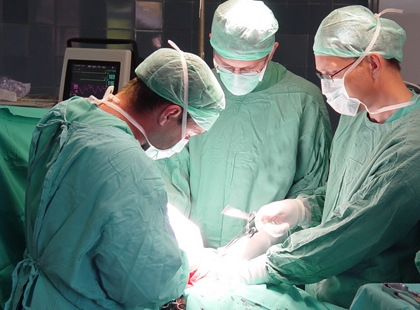 “Doctors say nearly any surgery usually done with a local anesthetic could work with hypnosis and less pain medicine. Proponents say hypnosis can dull patients’ sense of pain and that it also cuts down on the need for anesthetic.

That means patients recover faster and hospitals save money, according to some studies.”

Read more: http://healthland.time.com/2011/07/27/for-some-hypnosis-eases-pain-recovery-of-surgery/#ixzz1TVVYuOE1
I think it’s interesting to note that while hypnosis is not recommended for major operations like open heart surgery, any procedure that uses a local anesthetic can benefit from hypnosis. While the anesthetic may still be applied, by combining it with hypnosis, less of the drug is needed and recovery time is reduced.

Of course the article points out that hypnosis is being used far more in European hospitals than in in the United States, but I think it is important to point out that hypnosis has been a medically approved procedure here in the US  since 1958.

As the story was told to me, Dr. Milton Erikson, MD a psychiatrist who is considered the “Father of Modern Hypnosis” and who is the model upon which much of NLP (neuro linguistic programming) is based, was basically accused of being a “quack” for his extensive use of hypnosis and threatened with expulsion for the American Medical Association.

After he defended himself and made his case for the validity of hypnotherapy and hypnosis,  the AMA was quick to add Hypnosis to the list of acceptable practices.

Good thing, because it works! The only problem is that it’s so affordable.