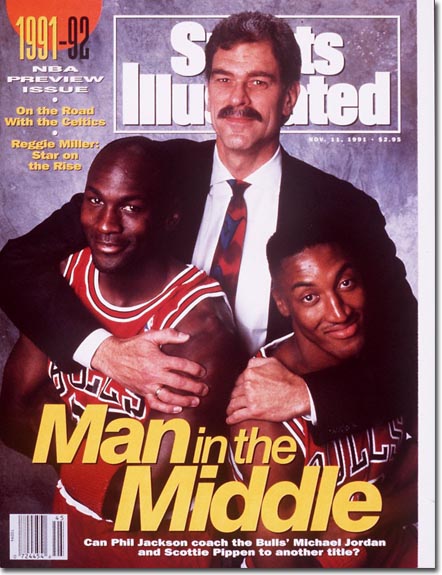 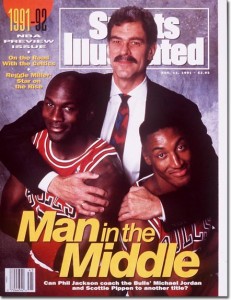 In it, he writes at length about the challenge of integrating superstar Michael Jordan, arguably the best player in the history of basketball, with his teammates.

Jackson noticed that in many ways Micheal’s superstar status kept the other players form stepping up and playing their best. Plus it made the team vulnerable because an opposing team could double or triple play Jordan. So Coach Jackson sat down with Michael and ask him if he would be willing to shoot less and pass more.

“If I was going to have any success realizing my vision for the team, I knew my first challenge was to win over Michael Jordan. He was the team leader, and the other players would follow if he went along with the program. Michael and I had a good rapport, but I wasn’t certain how he would respond to the idea of giving up the ball and taking fewer shots. Usually coaches have to coax their star to produce more; in a way, I was asking Michael to produce less. How much less, I wasn’t sure. Perhaps enough to prevent him from winning his fourth straight scoring title. Scoring champions rarely play for championship teams because during the playoffs the best teams tighten their defense and can shut down a great shooter, as Detroit had done with Michael by double- and triple-teaming him…

Michael was more receptive than I thought he would be.  Right after Labor Day we had a private meeting in my office and I told him, “you’ve got to share the spotlight with your teammates because if you don’t, they won’t grow… the important thing is to let everybody touch the ball, so they won’t feel like spectators. You can’t beat a good defensive team with one man. It’s got to be a team effort.”

Jordan replied, “Okay, you know me. I’ve always been a coach-able player. Whatever you want to do, I’m behind you.”

That was it. From then on, Michael devoted himself to learning the [triangle] system and finding a way to make it work for him…

In so many sports the Mind of the team is created with an almost Jedi-like mind melding of individuals who are consciously and unconsciously moving towards becoming a cohesive unit that functions together.

Creating a team that functions as one is not some kind of accident or luck. It requires leadership and trust among the players. It is not a given. It is earned.

As the champion Chicago Bull’s discovered once they applied this principle and practiced it until it was 2nd nature, a team that thinks and breathes as one unit is unstoppable.

There are two points I want to make as I reflect on this:

First of all, you and your team already have all the talent and heart needed to be champions. Right now. The particular sport doesn’t matter. It doesn’t even matter if we are talking about the debate team or a cast of actors or a group of musicians or a business team.

These principles are universal. They are available to everyone. The difference between the great and the not so great is the kinds of thoughts, beliefs and attitudes – the “Programs” – running in their minds.

Tune these, adjust them, eliminate others, cultivate more empowering ones and the results will eventually show up on the scoreboard as well as in the improved lives and enjoyment each athlete experiences both on and off the field.

Secondly it is the idea of being “coach-able”. If you wonder how Jordan became the legend that he was in basketball, you have to understand that first and foremost he was willing to learn, he was willing to be coached. Talented athletes have egos. Our ego’s will get in the way of what we are ultimately capable of if we allow them to.

Curious how you might be able to get access to specific and duplicateable tools and techniques to get “stinkin’ thinkin'” out of your own mind and off your team?

Remember, as one of my greatest coaches said to me not too long ago…

Most importantly in my peak performers program, you learn specific, easy to remember tools to use on and off the field to get an almost unfair advantage over your competitors.