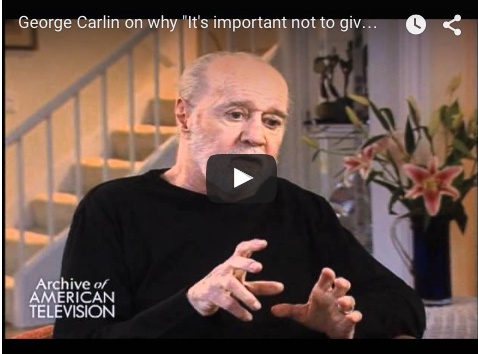 What was the key ingredient to George Carlin’s ultimate success?

“Not Giving A Shit.”

It wasn’t some big break. It was a recognition of an attitude that shifted EVERYTHING.

Jason Capital calls it, “Being Care Free” or “Not giving a fuck”.

But it all comes down to an attitude that almost edges on arrogance.

Major league players have it. They KNOW they are good. They don’t give a shit if you like them or not. THEY know they can hit a ball out of the park and you can’t. They know deep in their hearts they are world class. And they are activating their own dream every single day.

Self made millionaires have it. They know that if everything goes to shit, they can start over from scratch and be right back on top.

Ultimately one of the key transformation tools that we have to explore as men is the idea that we have to take an authentic stand. The moment we stop trying to please everybody else, women, mom and dad, teachers, bankers, authority figures, etc. We begin to free ourselves from the constraints and cages that pleasing all those people have forced us into.

Speaking your mind is not. Being true to yourself is NOT safe.

That’s why a man who doesn’t care what other people think about him is so damn attractive to women. Ultimately women are attracted to a man who is inwardly powerful. SHE cannot pull him off his path. So eventually she stops trying and jumps on the train that HE is driving.

Up to this point, my guess is that you are:

You may not yet be ready for this but you can be among the first to give this new course a test drive:

“How To Be The Man The Women You Want CRAVE”

Hey, I don’t care if you join or not, however if you DO Join Team Cowabungah Today you’ll Get First Crack at this and other kick ass courses…plus fresh Cowabungah moments after I create it… Plus this shit could totally change your life in a good way. Whatever. :o)