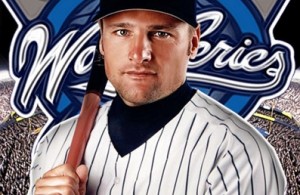 What really happened to All Star Baseball Player Chuck Knoblauch?

One day he could throw to 1st from 2nd base. The next he couldn’t… and his All-Star career was basically over.

Once considered one of the game’s best fielders (in fact, ESPN personalities nicknamed him “Fundamentally Sound” Chuck Knoblauch), Knoblauch’s play deteriorated shortly into his Yankee career. In 1999 he began to have difficulty making accurate throws to first base, a condition sometimes referred to in baseball as “the yips”, “Steve Blass Disease”, or “Steve Sax Syndrome” in more recent years. By 2000, the problem had grown serious enough that he began seeing more playing time as a designated hitter.

Knoblauch tried various solutions to his problem, but his throwing would not improve. He made an unprecedented number of throwing errors, routinely making abnormal throws out of the reach of the first baseman. (During one game, an errant throw sailed into the stands and hit sportscaster Keith Olbermann’s mother in the head.)[5] After making three throwing errors in six innings of the Yankees’ 12-3 loss to the Chicago White Sox, on 16 June 2000, Knoblauch voluntarily left the game. He then left Yankee Stadium in his street clothes while the game was still in progress.[6] Stumping commentators, fans, and himself, Knoblauch never fully recovered his throwing accuracy. He was reassigned to left field by manager Joe Torre, never to return to his old position.

It’s impossible to know what was going on in Knoblauch’s mind during this time, but suffice it to say it wasn’t lack of talent or training that caused this phenomenal athlete to self destruct.

It was something in the way he was thinking

Unfortunately, he wasn’t able to correct the problem and I am not privy to whatever he did to attempt to fix it. All I know is that what goes on between our ears is the fundamentally most important factor in peak performance for athletes.

Younger athletes like those in High School or even Middle School can benefit from a program of “Mental Toughness Training” that will enable them to have full access in high pressure competition to all the resources they have trained into their bodies during practice.

That is the key link up.

When we are under stress and pressure many of us seem to shut down access to what we know. This happens in all areas of life, not just sports but unlike a guy with “approach anxiety”, anxiety in sports can mean the difference between getting into the college or your choice or not. Not to mention potential scholarship money.

The good news is that with the right leading edge tools, you don’t have to stand by helplessly while this destroys your love of the game.

This can be fixed. And ast.