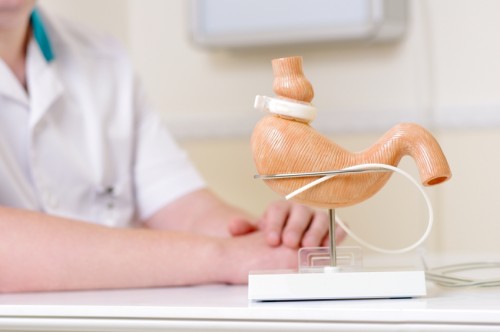 I was driving along Route 787 in Albany NY recently and I saw a billboard that repulsed me.

The marketing hype and appeal is basically focused on how you don’t actually have to change. You can pay to have this procedure and the fat will just go away.

In case you are considering Lap Band Surgery or Gastric By-Pass Surgery you need to read this article and watch the video below.

Lap Band Surgery is the procedure of placing a band around the upper part of the stomach just below the esophagus’s entry into the stomach.

The idea is that it makes your stomach smaller so you eat less, feel full sooner and thereby lose weight without having to actually change much in your life.

The problem is that this surgery is hazardous to your health in several ways.

The most tragic point about this procedure as well as other even more invasive operations like Gastric Bypass is that it requires absolutely no change in lifestyle on the part of the patient.

I knew a young woman socially who had this surgery. She was continuing to eat cake, candy and drink soda just like she did before her surgery. And after every single meal she had significant discomfort. It was really sad to see.

If you want extreme, rapid and healthy weight reduction you are far better off doing a full out juice fast. If you haven’t already seen it, check out the movie: “Fat, Sick and Nearly Dead”

Ultimately you still have to address the patterns of behavior that caused the problem in the first place.

In my ten years of experience helping people lose weight, the most significant success is always marked by a healthy lifestyle change that is sustainable and enjoyable.

Punishment and deprivation (or the trauma of invasive surgeries) are ultimately NOT motivational. Addressing the root causes of overeating and sedentary lifestyles is the key to lasting change. Operations to stop a habitual pattern of using food as medication and entertainment are like putting a band-aid on a bullet wound.

But interestingly enough, hypnosis addresses the underlying causes of morbid obesity and facilitates making needed changes far easier and “doable” than relying on the old “willpower” and “starvation diet”.

What is even better is that hypnosis is:

There is more about the dangers of Lap Band Surgery at Hungry For Change.

A study from 2011 that sought to determine the long term efficacy and safety of gastric banding for morbid obesity revealed shocking results. The study looked at 82 patients who had undergone gastric banding between 1994 and 1997:

“The high failure rate of LAGB, at least in our hands, could be detrimental to its future continued widespread use as a restrictive weight loss operation,” wrote the authors.

If you have questions for me or you’re ready to check out my course about mastering your mind for a change around food, and fitness, click the button below…

It’s Not Just About The Food